Years ago I read the book Urban Tribes.

I remembered from the book only the author’s takeaway that single people in America are forming tribes that are their own version of a chosen family not a birth family. It wasn’t that great a book except for his premise about creating a tribe of kindred spirits to stand in as a family.

A friend and I went to hear live music. I started to fall asleep on the banquette we sat on in the back of the club. Then I got a cup of water from the bar. We went outside for fresh air.

I perked up when the featured act started to perform–a fake-jet-black-haired guitarist who’d been touring for 30 years–not all at once that is over the years.

We ate in a fabulous diner at midnight. To get home we has to cross “The Boulevard of Death”–the term for a street where numerous people get run over trying to cross it every day. As I started to cross no kidding a car was speeding down the road.

My friend’s friend had run across the street to flag down a cab to take us home. We followed him like blind chickens crossing the road because we had to get to the other side.

Only I cross the street when no car is coming my way. The drivers here are dangerous. They don’t stop at stop signs. They don’t stop for red lights and keep going through the intersection when the light is red.

I take my life in my hands crossing the street every day. No kidding.

I’ll end here with a photo of our divine lemon meringue from the diner: 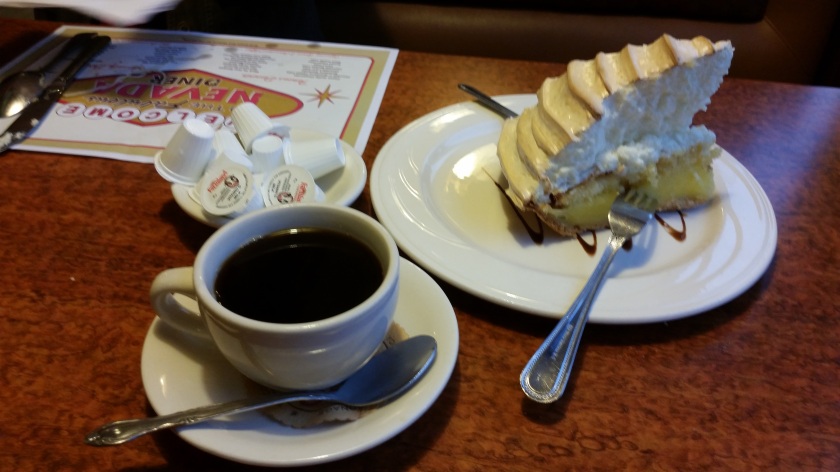 I sold copies of Left of the Dial at the Italian American Sagra del Libro or sale of the book.

It was early so I ducked into Angelo’s of Mulberry Street.

“Soltanto uno,” I told the white coat waiter. “Only me.”

“To drink?” He ushered me to a table.

“Aqua.” I unwrapped my thick pink boucle scarf and eased out of my coat.

CNN was playing on a TV on the ceiling. I ordered the mezza luna and escarole.

Doppo cena / after supper I bought a pink scarf from a street vendor with the ubiquitous “cashmere” label even though it’s not likely cashmere for $5.

I was the first to read at the Sagra open reading. I read the Chills concert scene from the memoir.

You know it’s too cold when you wear the new scarf inside the coat and the old scarf outside the collar.

Spring is here in three weeks so hopefully the cold will be another season’s memory soon.

The event was filmed so stay tuned for where you can view the video where I’m reading from the book.

Mille grazie to all who stopped by.

Stunned is the word for what happened to me when I did a good deed this weekend.

I was entering a market and a woman sitting outside belted out: “Spare a couple dollars for a sandwich.”

“Come inside and pick something,” I quickly ushered her in. Luckily the vegetable pannini was only five dollars. “Can I get a soda?” she asked.

“Okay,” I said and she came back with a San Pellegrino.

“How much?” I queried the cashier. “Seven dollars,” she said. I paid and started my own shopping.

“Thank you, thank you.” The woman hurried outside to her perch in front of the store.

As I exited with my own provisions I thought the woman might have a mental illness. She might collect SSI and not have money this far along in the month to buy food. She was not skeletal like a heroin addict and did not wear long sleeves. Her hair was immaculate and she wore a tee shirt and pants.

I have a good nature so I didn’t think the woman had money and was too cheap to want to buy her own food. She might have been on the cusp of becoming homeless.

Kelly Cutrone in her book Normal Gets You Nowhere excoriates Christians and other shoppers who go in and out of stores buying $19.99 junk gifts and step around homeless people in front of the stores. No one gives these subway grate fixtures money or offers to buy them a slice of pizza.

Today I was tested: I bought a woman begging for change a meal. My intuition tells me she might have had a mental illness and couldn’t afford food this far along in the month.

This is a great mystery to me right now.

The trains were running late and it took me two hours to get home. By then my broccoli rabe was wilted. The delice soft cheese was melted.

It was another hot night in a cool city.

Getting on and off the bus is something else. The bus arrives late–a crowd storms the exit door to leave.

I waited on a friend in a Barnes & Noble. Everyone coming through the door was beautiful. I wore a blue Sperry hat, blue cropped chinos, and my svelte Nike training shoes.

I go into Sephora before the shrink’s visit, not after. A makeup artist chose a blush for me called Torrid.

At 50 my attraction to Manhattan has worn off. It’s not the playground of my youth. I go there to shop for clothes. Like the sleeveless blouse I bought that reads: You Are My Favorite Daydream. It was my version of a mid life reinvention: a Coachella persona.

We all want another person’s eyes to light up when we enter a room. I serenaded my friend in a Brazilian restaurant.

The night ended. The Greenmarket vendors had folded up and gone away.

The moon rose like a communion wafer, host of a dream swallowed whole.