You have a voice so use it.

Either way I stand by my assertion that each of us should use our voice to champion what we think is right.

Yes–I take such pride in knowing that a superstar like Ariana Grande tells it like it is. She’s not afraid to lose either fans or money by speaking her mind.

Grande’s fearlessness should instill in everyone the courage to make a difference.

I know that having read the Elle interview I was inspired to join the singer in taking a stand against how those in power use divide-and-conquer tactics to keep Americans from banding together to fight common injustices.

I was motivated to pick up Grande’s baton of bravado and pass it on to readers.

This after the interview revealed that the pop singer aligns with the Black Lives Matter voices.

One day after I wrote in here recently about Eric Garner a news report was published stating his family was still seeking justice four years later for his homicide.

I seem to do the opposite of what other people do.

In a New York Times article last week analyzing the composition of the electorate at the polls in 2016 it was stated that 53 percent of white women voted for the president.

Where did that statistic come from?

I’m convinced along with a friend that Mr. Toupee will win a second term.

For the truth about why his reign is disastrous I will refer you to the Democracy Now news articles.

To remain silent on the things that effect us is to be complicit in the erosion of the human rights and liberties of American citizens.

I’m still obsessed with the latest mascara wand. Yet there comes a time to talk about other things besides my current Diorshow haul.

My goal is to tell readers to join me and Ariana Grande–two proud Italians–in refusing to be silent about the things that matter to you.

It matters to me that real wages are still stagnant even with a booming economy. That workers aren’t getting their fair share of the billion-dollar profits of their employers.

That women are being denied the right to obtain and use birth control.

That Mr. Toupee and his ilk are rolling back efforts to curb climate change. 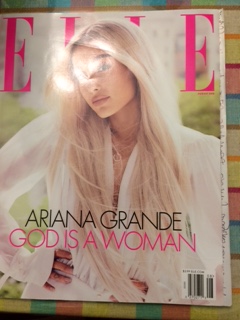 I shot this photo on my dining room table with an overhead light fixture. Thus the hologram effect on the singer’s face.

Reading Elle is my secret joy. I quote from the magazine to encourage women blog readers to go out and buy the magazine. You can get it in Rite Aid.

The August 2018 issue of Elle  features Ariana Grande on the cover with this manifesto below her coveted mane: God is a Woman. I beg to differ: God is Ariana Grande.

In the interview with this pop singer superstar it was revealed that Grande is Italian: part Abruzzo; part Sicilian. Though I’m Sicilian too I’m as white-faced as Casper the 1970s TV show ghost.

“You’re a real white girl,” the guy who shot the first photo for my original website told me. “Are you sure you’re Sicilian?”

It makes me proud that Grande is Italian too. Italians are not all dum-dums, racists, and mafioso. With no other group of people is it okay to slander them like is commonly done with Italians. It seems like it’s open season on people with a lot of vowels in their last name.

Ariana Grande has a tattoo that reads in fine print bellissima, or most beautiful. She’s copped to having anxiety. At her concert in Manchester a bomb exploded and her fans were sent running away. Ever the trooper, she returned to Manchester for a benefit concert.

Why I ultimately like Grande is that she doesn’t care about her reputation. I’ll quote this snippet from the Elle interview: “She is loud and proud in her anti-Trumpism and has aligned herself with gun reform and Black Lives Matter.”

You don’t say? She does: “There’s a lot of noise when you say anything about anything. But if I’m not going to say it, what’s the fucking point of being here? Not everyone is going to agree with you, but that doesn’t mean I’m just going to shut up and sing my songs. I’m also going to be a human being who cares about other human beings; to be an ally and use my privilege to help educate people.”

As per the interview too: Ariana Grande has been in therapy for more than 10 years.

Did I say Ariana Grande is Italian?